At the beginning of January 2019, the Chinese Ministry of Ecology and Environment announced that it would be expanding its ban on importing waste. The initial ban, adopted in 2018, outlawed 24 types of recyclables and solid waste from entering the country. It also toughened the standards on impurities levels in imported waste materials, making them almost impossible to comply with. With the 2019 extension, Beijing has widened the ban to encompass 32 types of scraps for recycling and reuse including post-consumer plastics such as our shampoo or soda bottles.

The initial ban created a worldwide headache as scrap managers in the United States, Europe and Japan suddenly lost access to their main recycling market. The new version of the ban will surely lead to migraines.

China has been the world’s dumpster for almost 50 years. Importing and recycling scraps has allowed China’s factories to access cheap materials and support its emerging economy. Since 1992, more than two-thirds of the world’s plastic waste has ended up in China, according to a study in Science Advances. And this only accounts for plastic.

China, now the world’s second-largest economy, produces significant amounts of its own waste and is now putting in extra efforts to enforce recycling within its borders. While recyclables can be valuable for Chinese manufacturers, recycling is generating more garbage and pollution through energy-intensive processes and contaminated bales of imported waste. By closing its doors to foreign scraps, Beijing hopes the ban will have a positive impact on local concerns such as water and air pollution, and help “to protect China’s environmental interests and people’s health”.

The Western world — including the United States — has relied on China for years to take care of its scraps. With this abrupt policy shift, many countries are realizing that they lack the means to recycle their own waste at home.

In response to the ban, the global trade price of many scrap materials plummeted and the international frustration toward China’s decision was proportional to the West’s panic. The Western world accused China of making a hasty decision that will lead to a global increase in pollution, as materials that could have been recycled will likely end up in landfills or incinerators and contribute to the generation of greenhouse gas emissions.

The biggest exporters of waste are also the most ill-equipped to respond to the Chinese foreign waste ban. “[The United States] are producing an enormous amount of plastic material that we don’t know how to handle,” said John Hocevar, ocean campaign director for Greenpeace USA, in an article with the Guardian.

To avoid having to deal with their own trash in their own backyard, the Western world is now shipping its recyclables over to countries such as Malaysia, Vietnam and India.

In the long term, the problem will need to be solved at the source with conscious efforts to reduce waste.

As of yet, countries in Southeast Asia do not have the capacity to recycle so much of our waste, nor do they have the regulatory infrastructure to prevent illegal dumping. But as the saying goes, “out of sight, out of mind.”

The University of Georgia reports that by keeping foreign waste out, China is expected to displace 111 million metric tons of plastic trash by 2030; that’s the equivalent of more than 300 Empire State Buildings. But sending scraps offshore is only a short-term solution. The United States and Europe need to think of alternatives to dumping in Southeast Asian countries, which will most likely follow in China’s footsteps regarding waste policy. Malaysia has already been revoking import permits and in May 2018, Vietnam temporarily banned foreign plastic waste as its docks were overwhelmed.

In the long term, the problem will need to be solved at the source with conscious efforts to reduce waste. We can all take measures to reduce waste. But ultimately, consumers are not the root of the problem. Businesses are. Consumers have little control over the packaging that accompanies the items they buy; packaging-free options are still too scarce and for now accessible to only a small share of the population that has time and money to allocate to their green conscience. China’s waste ban should really be a wake-up call.

Waste management is one of our biggest challenges. Maybe this idea will help us process the huge amounts of domestic waste we collect every day! Aluminium Movable Tent which  easy to move and installing as  temporary building for temporary garbage storage house tent!

Installing the Large warehouse tent within one Day!!

Inventories in the garbage or warehouse become an important current asset of the enterprise. And if a company or government does not have a warehouse, it is also an intangible injury to its own products. Who would pay for the items that have been blown by the wind and rain? At this time, the emergence of warehouse tents has solved this big problem for major enterprises, and its role can be imagined.

Warehouse tents are also often referred to as warehouse tents. They are temporary buildings, temporary tents that can be used as warehouses, as well as production workshops, logistics greenhouses, etc. The warehouse tent is generally a herringbone canopy with a large net span structure, spanning from 3m to 50m, and extending in length by a multiple of 3m or 5m. Moreover, there is no pillar inside, and the space utilization rate can reach 100%. Large-scale equipment such as forklifts can enter and exit freely.

When it comes to industrial warehouse tents, I have to mention several features of it:
First, the warehouse tent has mobility, flexibility, and at the same time without losing security, it can be expanded or reduced according to the needs of the enterprise, and the disassembly and assembly is convenient;
Second, the warehouse tent is adaptable, the requirements for the environment are not very high, and the general ground can be built. Even ordinary grass, concrete, etc. can be built;
Third, the warehouse tent has good lighting, which can save a lot of electricity consumption costs. The general warehouse tents are mainly equipped with tarpaulins made of aluminum alloy frames, and the tarpaulins have good light transmission and can be seen without lighting during the day. Of course, if you need a tarpaulin with good shading, you can also choose an opaque tarpaulin to achieve the effect.
Fourth, the warehouse tent has a good thermal insulation effect, generally can play a thermal insulation effect on the stored items. Warehouse sheds used as warehouses are generally double-layered and can also be used as mobile refrigerated warehouses.
FT is a tent manufacturing company specializing in the production of warehouse tents. All of the above features are available. Moreover, the main structure of the Meister Industrial Warehouse tent is composed of high-strength hollow aluminum alloy and steel parts. The adjustable base can cater for all kinds of uneven ground. The roof is covered with double-sided PVC coated synthetic fiber cloth, which is resistant to tearing. , waterproof, UV resistant, flame retardant (B1 DIN 4102 / gb8642). 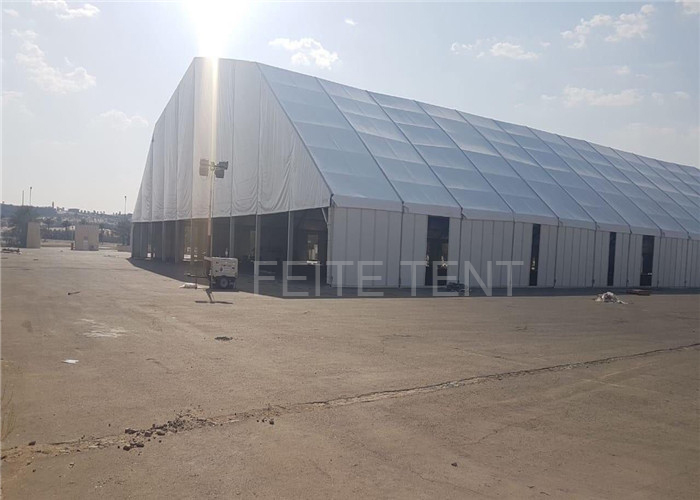 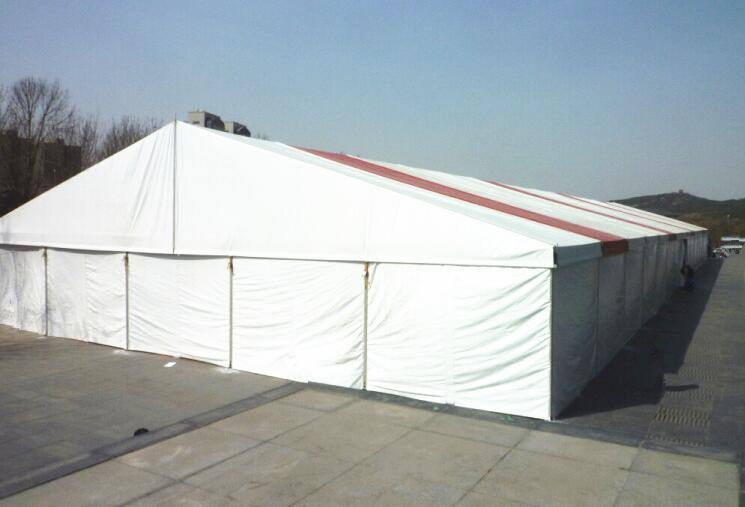 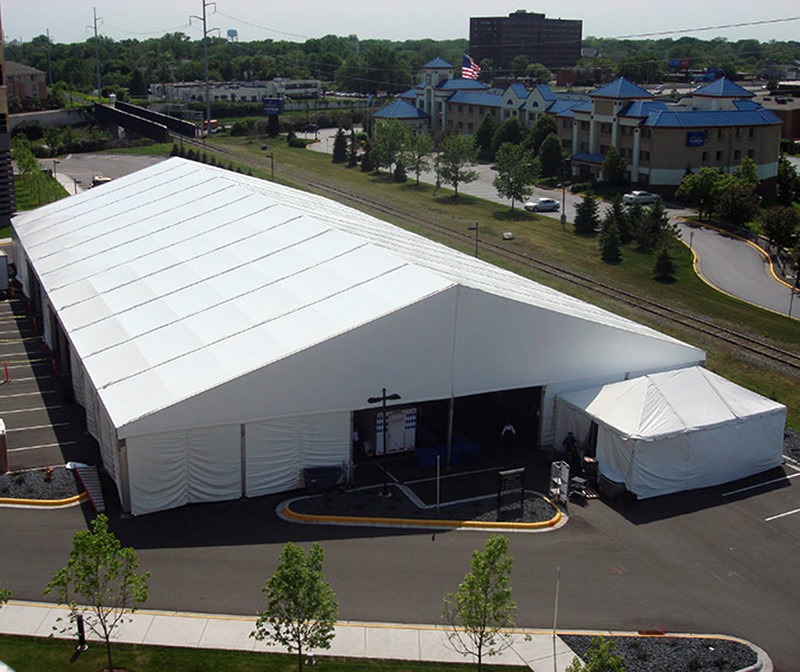 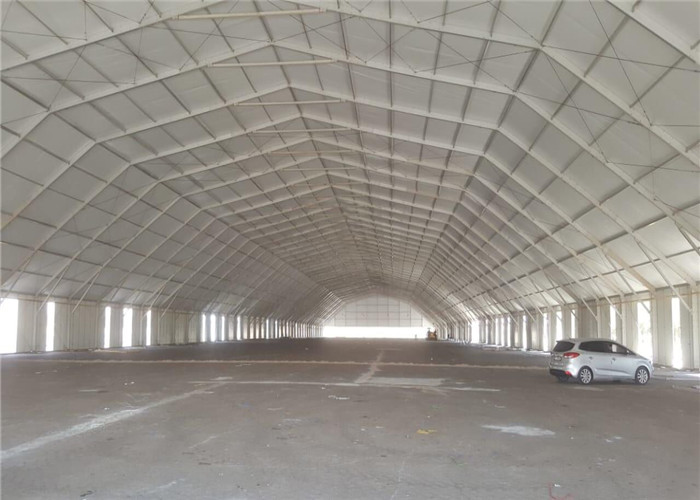 Diffirent Sidewall For Your Choose,PVC wall is the most cheaper one 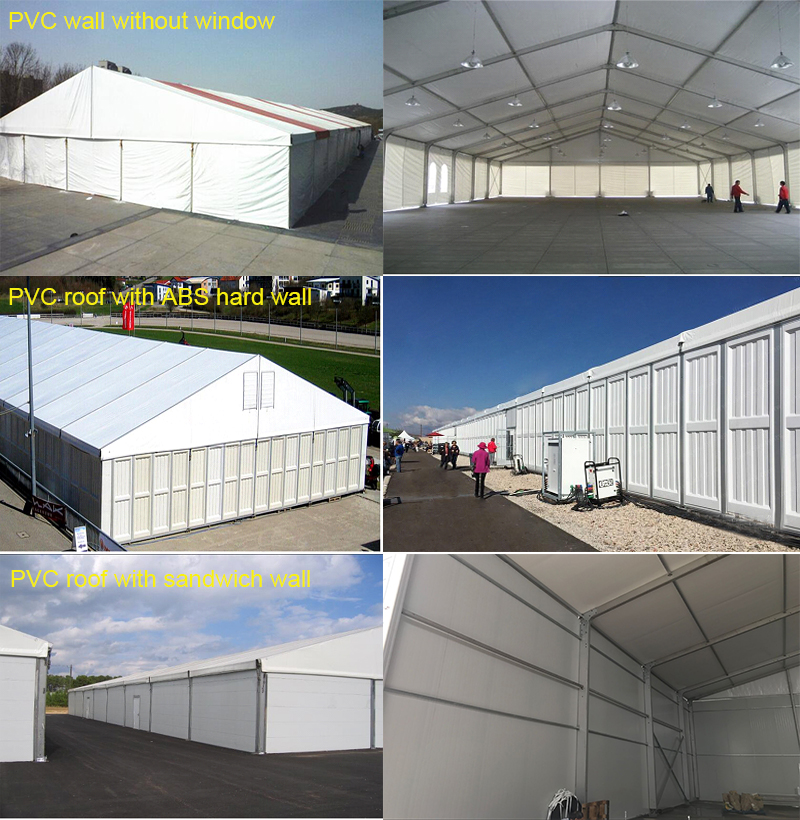 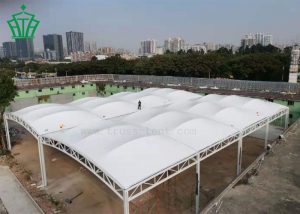 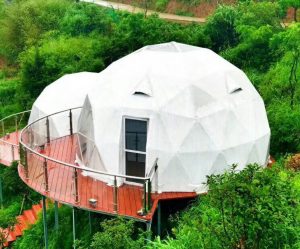